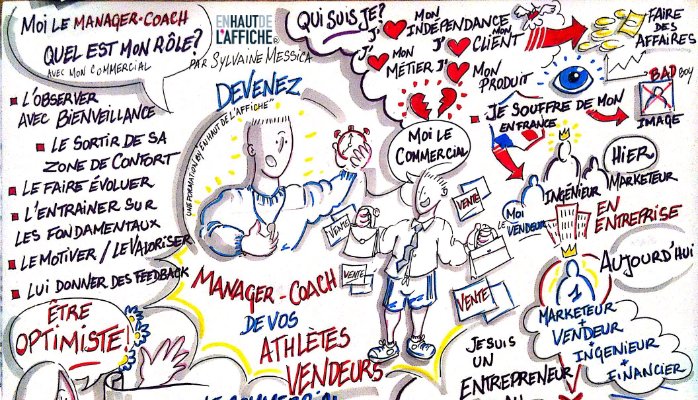 The analogy of high performance sport for sale and negotiation

The beautiful trade of commercial

Commercial is one of the most beautiful professions in the world! I’ve been training sales people since 2002, I’ve been a “pure juice” since 1988… and I’ve also managed them!

The commercial is an independent being, in appearance. It supports the company. He sometimes suffers from his devalued image, in France… Fortunately, it evolves, very slowly. We were in a culture where the engineer, and later the marketer, were better seen than the salesman, who always has the ungrateful role of pushing doors!

In family SMEs, the salesman is often a pillar and the marketing department alone, which in this case is very rewarding and formative.

The commercial is the first marketer of the company and sometimes an engineer, he makes progress his company, his research and his products, through the evolutionary needs of his customers. For his image to evolve, he too must evolve, change. Business requires ethics and know-how, through increasingly complex relationships that require a more developed know-how.

Today, thanks to social networks, can everyone do business? No, not everyone is that talent. And in this “virtual-relational” world, out of fear, few people like real salespeople, those who dare to approach the customer and generate the fruit of a company’s profitability !

That’s why there’s a great card to play for sales people, those who love their job, their customer, their product and their company. And especially those who like to learn!

In fact, successful businesspersons are often salespeople! You can have a good expertise, without commercial, it is quickly obsolete.

The skills and talents of the athlete-seller

Personal development and behavioral evolution: 80% of the profession

Passionate about pedagogy and sales, I like to reveal these postures. It’s not easy to discover or tenfold your talent. The commercial is the sportsman of the company, its representative for the selections and the matches, friendly or not. So he has to train and have a coach!

Going out of one’s comfort zone is a manna of possibilities as long as one is optimistic, at the beginning it upsets, it is called change, finally, evolution. Developing your posture, as well as training regularly on the fundamentals of sales and negotiation, is the perfect parallel with sport!

Would the athlete be more adulated and respected for his performances, his motivation and his kow-how-to-be ?

The positioning of true sports athletes from competition

For them, it is abnormal not to be trained, therefore perfectly assumed and says loud and clear that one is coached. Edgar Grospiron, Olympic champion and lecturer, introduced me naturally at the end of his conferences, while I came hidden to coach some leaders.

The teachings of his coaching, taken from Edgar Grospiron’s testimonial: “Nothing equals discipline and work. You don’t evolve in the easy way. I have the feeling to find a way of working which resembles that which I had when I ran. At the top of the poster it’s high level!”

And what I liked in this accompaniment was that I could have requirements as a coach, he trusted me!

If all the leaders and managers trained communicate it to their team, it has a direct exemplary impact!

In the United States it is not a fashion to be coached, it is an ambition, a duty, a humility, a means, a normality.

When you have talent, in the world of performance, that’s where you have to start training and therefore unlearning…

My observations from salespeople in training: two ways of seeing things for them: “I was wrong for 10 years because I did not apply this kind of principle, therefore easier to be in denial” or “what opportunity, I will be able to sell better and more, and therefore earn more and earn more”.

When I see a salesman exclaiming during the training “I became aware but I already knew it, or I’m going to try it, or it doesn’t apply to me because it’s not the same for me”, I say “we’re not in “knowledge”, rather in movement”. Knowing what to do and not doing it in the field is tantamount to resistance to change and a lack of perspective on learning to develop the sales profession. It is not knowledge, it is perpetual personal development and fundamentals, always, and as in sport.

Being flexible and open to all feedbacks, to facilitate change, better evolution, and the manager evolves by making others evolve, what a great job that that of manager-coach, the coach of his teams!

The manager-coach and his coachee: a partnership

The sales representative and the manager must walk together in a “manager-coach” approach. This support ignores its business and profitability results. The coach has the ability to adapt to all his players on the field of sale,

History of a live sales coaching…

As I write, a customer calls me and I trained his sales people in negotiation two weeks ago. At the time, this upset certain well-established beliefs. Two weeks later: “So how’s it going?”What is great about your pedagogy is that you train us so much during the training module that at the end of it, we are really competent and motivated to act. We transformed and applied it in the two days following your intervention.

My pedagogical vision: the result is a consequence of an approach: to accompany the human being, his personal development, his motivation, therefore his development in his profession.

This coaching posture is more delicate than the usual manager or trainer posture, because you act in movement and transformation. Posture requires agility, pedagogy, listening, firmness or assertiveness, and letting go! The price of glory is when you can observe and measure the results, which is a consequence and never an objective!

In sport, after the game, the players and the coach debrief, listen, exchange, this moment is very important. Take advantage of every coaching moment, for example after a training or workshop. The wrong question would be, “So she was the training? ». Even if the answer is “great”, the learner does not formalize his new commitments if he has written or thought about them. He who goes into critical denial and therefore goes into flight. You are a manager-coach, so make them talk about themselves, their experience, their awareness, de-dramatise and especially their decisions and commitments!

In short: change and develop your management, your sales people will evolve and will be well and truly managed!

As in sport, you will be criticized, and the day you win with your team, everyone will be inspired by you, as in 1998 after the victory of the French team!

See this article on LinkedIn